Hello to all my Mah Jongg followers, and a big welcome to the new ones. I’ve been asked to pull in the reins on my blog posts. It seems some folks would like less information, while others are thrilled with lots of it. With this in mind, I’ve decided to use shorter blogs to give everyone time to absorb and practice my Golden Rules while you learn to play American Mah Jongg.

Now that you’ve read the first blog and second blog covering Golden rules 1-7 in this blog series and have them under your belt, let’s talk about Golden Rule #8.

Golden Rule #8: When a game has ended, if you were the bettor, don’t ask another player why they chose the hand they played as opposed to another hand. The tiles and hands are in the “eyes of the beholder.” 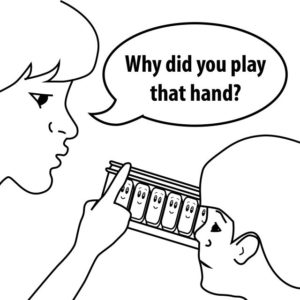 Okay . . . here’s where I come clean. I’ve broken my own rule! But in my defense, I broke this rule before creating my Golden Rules. Since then, I have consciously kicked that undesirable behavior which, in this rule, is more about behavior than habit. Refresh yourself on the differences between behavior and habit in this great article.

Here is the scenario played out for Golden Rule 8:

You are the bettor. The player you bet on did not make Mah Jongg. You are glaring at that player. You are fuming because, in your opinion, that person should have played his or her tiles differently or should have gone for a different hand. Your first instinct is to point a finger at that person and ask why they did what they did. After all, had they played the right hand, they would have made Mah Jongg, right? And, if they had made Mah Jongg, you would have won some money!

Now is the time you must choose to consciously zip those lips up rather than suggest that the player made a wrong choice in the hand they chose to play. You might have to bite a bit more skin off your lip than you bargained for, but no two players are going to see the tiles or hands on the card the same way. The tiles and hands are in the “eyes of the beholder.”

Ask yourself why you would want to insult someone by inferring that they didn’t play the right hand, or what you considered to be the better hand? Do you want to make a scene over a possible $4, played at card value, self-picked and jokerless? When a game has ended, you have two choices:

Learn to play american Mah Jongg with my Golden Rules handy, so you can easily review and share them during your games. Learning these Golden Rules of Mah Jongg (sometimes spelled mahjong, mahjongg, majjang, and mah-jong) will arm you with the etiquette, good habits and behaviors you need to become a player everyone enjoys having around their Mah Jongg table.

Debbie’s Golden Rules #s 4, 5, 6 & 7 – Don’t dive across the table and grab the joker when doing a joker exchange. You’re not diving for a buried treasure and more!