Before I delve into Debbie’s Golden Rules, numbers 4-7, please review the Golden Rules 1-3 to familiarize yourself again with the differences between habits and behaviors and how you can become a master of your habits and a professed habit master.

Reading a good beginner book such as my book “Unlocking the Secrets of American Mah Jongg,” another Mah Jongg tutorial, or you can learn american Mah Jongg online, will certainly help you learn the rules of the game. It will not, however, teach you Mah Jongg etiquette.

As you learn Mah Jongg, keep my Golden Rules handy so you can review them often. The end result is, your etiquette, good habits and behaviors will turn you into the type of player everyone enjoys having around their Mah Jongg table.

Golden Rule #4: Don’t dive across the table and grab the joker when doing a joker exchange. You’re not diving for a buried treasure! 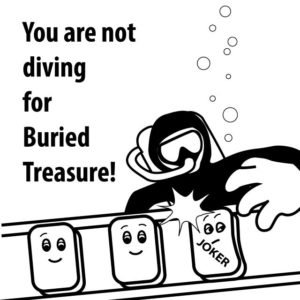 I giggle to myself every time I see a joker enthusiast, (although we all are!) lunge at full tilt lunge, their arm across the table, to grab a joker. Are you afraid someone else will get it first? Not to worry, if it’s your turn–it’s all yours!  Why appear greedy or in a rush to swoop up that joker? Instead, let’s try some joker etiquette.

Implementing joker etiquette is an easy habit to achieve. All you do is hand the tile you want to exchange to the person sitting across from you or next to you, and say, “May I have your joker, please?” How nice does that sound? Pretty nice, I’d say.

Let’s not forget that Rule #2 also applies here: Keep your hands to yourself, in other words, don’t touch anyone else’s tiles or racks. The tile atop the flat part of someone else’s rack is still their rack, and it’s their rack until the exchange is done. So, paws off my rack, buddy, and ask me politely for the tile.

Golden Rule #5: Keep your tiles close together on the sloped part of the rack. In other words, no spaces between them. 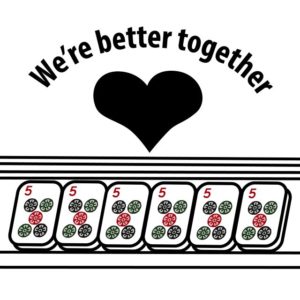 If you are one of those players that keeps spaces between the pairs (pungs, kongs or quints) in a hand you are going for, please stop! How you learned or  whom you learned from probably didn’t include the “no spaces between tiles on the sloped part of your rack” rule during the lessons. I think of myself as the “chief of the spacing police.” I continually push my students’ tiles together while they grunt and groan about it.

Please let me explain more about why you should break your space habit now. Keeping these few things in mind will make transitioning to this behavior much easier:

Tile spacing is not a foolproof way to give away what is going on with your hand, but it just might be. So, I’m asking, why arm your opponents with anything that might give them an advantage over you?

I have my own easy solution to transition away from tile spacing. Try flipping a tile upside down in a potential pung, kong, or quints that you can call on to expose. This will keep you on high alert for those tiles, should they get discarded. As well, you can flip the tiles upside down that you are discarding. You can easily disguise what’s going on by implementing the tile flip. This is an easy solution and acts as a tile separation without spaces.

Golden Rule #6: When you pick a tile from the wall, place it on the sloped part of your rack, don’t hold it in your hand and admire it. 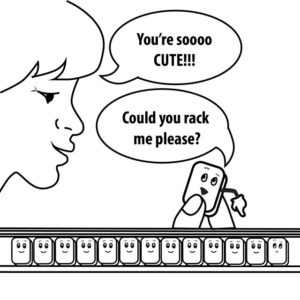 This rule is especially important for the novice player. If you don’t get in the habit of doing it from the get-go can, it gives an advantage to all the other players, especially to the more seasoned players. Why is it so important to pick a tile from the wall and place it on the sloped part of your rack?

Look at these points:

There is another important thing to consider when it comes to picking and racking. The act of picking from the wall and racking on the sloped part of your rack is not meant to be done at high speed. You want to do it at a nice, gentle pace, to allow the other players’ brains to catch up with what was thrown, and to give them time to blurt out, “I’ll call that.” I’ve seen players pick their tile from the wall and, with lightning speed, place it on their rack. I call that “not nice.” This is not a race. A nice pace is what I call “fair play” and is just plain ole’ being considerate. So how about implementing a little pick-and-rack etiquette . . . it will be much appreciated. 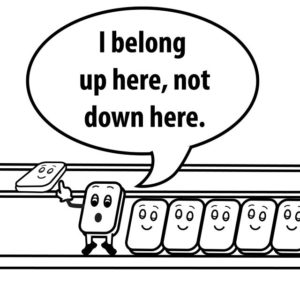 Oh my . . . there has been much controversy about whether this is allowed or not allowed, a National Mah Jongg League rule or not. After some investigation on this topic, I found out the facts (at least they are facts as of today) Currently, the NMJL rule allows you to pick up a called tile, place it on the sloped part of your rack, and then put it on the flat part of your rack along with the other tiles you are about to expose. However, a little birdy told me that the NMJL might be changing this rule soon.

Here are a few things to keep in mind:

In a final note, I cannot emphasize enough that with a little practice and after repeating these rules a few times, they will become second nature. With the ability to learn Mah Jong online, the social aspect of the game is lost. When you play in person you want to learn Mah Jongg with some etiquette and good habits and behaviors. Once you do, you can implement them into your games and, you will be amazed how it will spread to others. Our common goal as Mah Jongg players is, after all, to create a pleasant and fun-filled experience for all. Stay tuned for the next blog in this series, covering additional rules.

Online Learning Plus Quarantine, is it a Match Made in Heaven?

Debbie’s Golden Rule #19 – During Mah Jongg, do you use a loud tone while speaking? Do you whistle, hum or sing along to the music? If these are annoyances to others, consider toning it down or hold back your beautiful sounds to keep the peace. Or, if you are the one being annoyed, consider taking a closer look at why certain things bother you.

Out of my Love of Mah Jongg