Debbie’s Golden Rule #20 – Are you a finger tapper? Finger tapping is most likely an unconscious habit on your part but, consider reigning it in if those taps are zapping other’s patience. 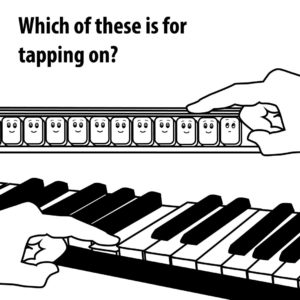 This will be the last of my blog series that helps us learn American Mah Jongg etiquette. In the meantime, don’t forget to keep a copy of my Golden Rules handy.

This Golden Rules, as with a few others, was requested of me to write. The woman that reached out to me let’s call her Amy, said that instead of humming, whistling, or singing along to the background music, while playing Mah Jongg, she would tap her fingers non-stop on the flat part of the rack. Well, not precisely non-stop because she would stop when it was her turn to pick and discard. She was shocked when another player grabbed her hand to stop her.

Amy, although I can’t entirely agree with the way your friend handled your finger tapping, her irritation might be justified, finger tapping might be along the same line of behavior, as mentioned in Golden Rule # 11.

I decided to go on a quest to find out what might be behind finger tappers. I found some impressive results. Although not exactly what I was looking to discover,  I thought the articles were worth sharing with you. The first article points to finger taping as a sign of boredom or irritation. I understand this and have seen people in doctor’s waiting rooms tapping away on their lap or chair arm. I am thinking that Amy’s tapping was not out of boredom or irritation since she did mention tapping to the music playing in the background.

In another article the author talks about the famous Halsted Finger Tapping Test. I had no idea that this sort of testing existed to determine neurological dysfunction. Let me be clear. Amy, the article does not indicate finger tapping is a sign of neurological disorders. Instead, the testing described in the article is used to study brain dysfunction, such as brain injuries and Alzheimer’s.

What I took away from my research

After reading the article, I thought practicing finger tapping more often might strengthen cognitive function, primarily since the studies are done to determine brain dysfunction. And what about musical instruments? Don’t most musical instruments require finger tapping? Think about all the exercises a music teacher gives you to help strengthen your playing ability. Those exercises done with our digits are also helping improve small motor brain function, aren’t they?

As for your friend, a soft touch on your arm with these kind words: “would you mind refraining from the tapping?” might be received more positively.

Debbie’s Golden Rule #17 – Praise the winner and their winning hand; you would expect nothing less from others.

Debbie’s Golden Rule #8 – When a game has ended, if you were the bettor, don’t ask another player why they chose the hand they played as opposed to another hand. The tiles and hands are in the “eyes of the beholder.”