When you first learn to play American Mah Jongg, it is all about learning, rules, the names of the tiles, the suits, the Charleston, and dragons to suit partnerships. Once you’ve learned the rules it is vital to put some good strategy to work. So, let’s learn Mah Jongg with Strategy. 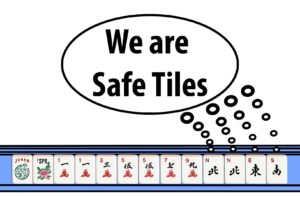 As a teacher, I not only want to teach the proper way to learn the game but also to explain how to become a good player. If you already play the game, my goal is to show you how to become a stronger player with strategy.

One of the essential strategies to me is what I refer to as the SAFE TILE strategy. I teach this in my book, Unlocking the Secrets of American Mah Jongg,. This strategy, if used correctly, can give you a powerful advantage towards the end of a game.

Most safe Tiles are ones that you end up with after the Charleston and usually an indication that no one needed them. One example is the Winds that no one wanted.  Safe Tiles can also be tiles picked during the game. In other words, based on what has already been discarded and or is already exposed, it can be ascertained that a tile you pick may be safe. For example, you pick up a 6 Crak and there are already 3 6 Craks on the table. In this case, chances are pretty good the 6 Crak you picked, is a Safe Tile.

What is the Usual Course of Business?

In almost all the games I play in, Safe Tiles, get discarded as soon as the game begins. I watch as all the winds, one after another, East, West, South, North, another East, West, etcetera, tell a story on the table. And of course, someone will acknowledge, “I guess no one wanted those!” Obviously, right? So, if no one wanted those tiles, so why are you getting rid of them?

Plan your Safe Tile strategy early by holding onto them. Give yourself some ammunition so that you have Safe Tiles to discard later on that no one needs?

The other day, I was teaching an Advanced Beginner class online at the  School of American Mah Jongg. During day 1 of the 2-class session, I ask, “How many of you know what a Safe Tile is?” I hear a few guesses, but rarely do I hear the right answer.

From the get-go, the students are confused. One student asks, “But, if no one needs them, why don’t I just get them out right away?” And of course, I proceed to explain this strategy concept again and again until I get a glimmer of, “Oh yes, I think I understand now.”

Safe Tiles in Action During a Game:

I’m sure you already have your thinking gears moving quickly, and you know as well as I know that this could have played out very differently. Indeed, it could have! Mah Jongg is a game where luck weighs more on the game than skill. The game can change immensely based on one’s picking.

However, using the Safe Tile strategy helped Player A win that game. As with many strategies, they can put the odds in your favor of winning or teach you how not to give another player Mah Jongg. It’s just one more tool to add to your arsenal of becoming a stronger and more defensive player.

Debbie’s Golden Rule #13 – Keep your phone on silent or vibrate while playing, everyone will appreciate this. If you are waiting on a call i.e., from a doctor, please let everyone know ahead of time.

Debbie’s Golden Rule #19 – During Mah Jongg, do you use a loud tone while speaking? Do you whistle, hum or sing along to the music? If these are annoyances to others, consider toning it down or hold back your beautiful sounds to keep the peace. Or, if you are the one being annoyed, consider taking a closer look at why certain things bother you.