OK, let’s face it, many of us have been playing mah jong for many years. If you started in your thirties or earlier and have been playing for over 30 years, it means you are no spring chicken, right? I’m pretty sure that puts you into your Golden years and the perfect pairing for Golden Rule #12. Even though this rule is an eye-opener into the “getting older” process, it should be taken lightly and with some humor.

Before we dive in, don’t forget to visit the previous blogs in this series: Part I, Part II, Part III, Part IV, V, and Part VI.

Golden Rule #12: Keep the chitter-chatter to a minimum during gameplay. For those of us that are a tad bit older, we need to concentrate. 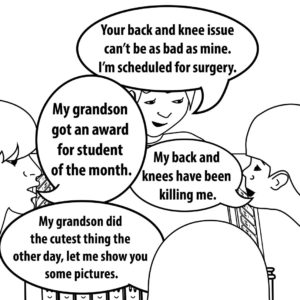 Talking, sharing stories, and woes at an afternoon or evening social of mah jongg create comradery. It helps us forge new friendships as well. It is time to break out those grandkid photos and show off your greatest treasures or your kid’s wonderful accomplishments. And, there are times we need to vent about our health challenges, relationship woes and more.

While sharing is caring, it can be quite distracting if done during a game. Let’s take a few examples with which you might relate:

How many of you can relate? I’m sure lots! As we age, our memory declines. For some us this decline will be normal, and for others, disease may play a factor. Regardless, stopping in the middle of playing mah jongg has its challenging as described in the above examples. Avoid those forgetful and sometimes embarrassing moments by using the following helpful hints:

Thanks for stopping by again. I’d love to hear about your experiences, so please leave a comment. Be sure to share my Golden Rules so that your friends can learn to play mah jongg with good habits and behaviors.

Stay tuned for another Golden Rule in my next blog.