Hoping everyone had a wonderful Christmas with family and/or friends. I bet some of you even played Mah Jongg on Christmas day. Did you remember to take my Golden Rules with you? If not, print a copy of my Golden Rules now, and bring them to your next game. Learn to play American Mah Jongg with etiquette by putting good habits and behaviors to work.

Before you read on, take the time to read through all the other blogs in this blog series.

Navigate through the changes you need to make by first understanding the differences between habits and behaviors. How many of my Golden Rules do you already practice? Whether you practice one or all 17, why not work on one new rule a week? Set a goal for yourself and watch your habits and behaviors transform you into a player everyone is proud to have around their Mah Jongg table.

Golden Rule #9: After a game is over, don’t ask another player why they made a chosen move. You are not the Mah Jongg police patrol, and each person is entitled to make their decisions about what or what not to do during gameplay. 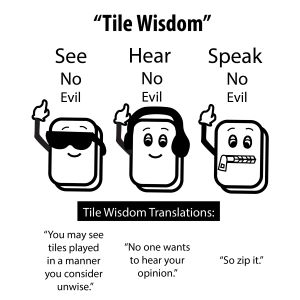 “Who made you the Mah Jongg police, anyway?” This is what I think when a game is over and one of the players flashes their badge and says, “Why did you throw that tile when you knew she needed it?” or, “I wouldn’t have done that!” As stated in Rule #8, everyone sees things differently. People learn differently and have their own style of playing.

I must admit that I am at fault for taking out my police badge occasionally. This happens when the teacher in me shows up. I have to remind myself to put the badge away. Not so easy to do especially when someone throws a flower with only a few tiles left in the wall.  However, Mah Jongg decisions that someone else makes are not the end of the world. Let it be. Creating more harmony than discourse should be the way.

Debbie’s Golden Rule #20 – Are you a finger tapper? Finger tapping is most likely an unconscious habit on your part but, consider reigning it in if those taps are zapping other’s patience.