Golden Rule #16: Be a humble winner; no one likes a gloater; you have not just won the lottery. 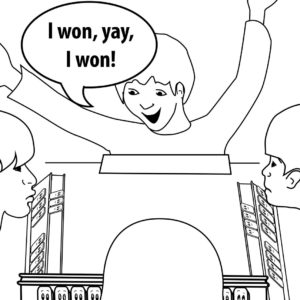 There are no behavioral rules for mah jongg or books on how to play mah jongg with etiquette around the mah jongg table. Because of this missing information, I’ve created this blog series in hopes of spreading the word about good habits and behavior while playing the game.

Golden rule #16 is something we’ve probably all experienced at one time or another. The overzealous winner who shouts, “I won, yay, I won.” Maybe not in those exact words but close to it.

As exciting it is to win a game or two or more, have you considered what other players might be feeling when you jump for joy after you’ve won? What about the player that’s been on a losing streak for weeks? To that player, it could feel as though you are rubbing it in their face. No one does these things deliberately and no one sets out to make someone else feel less. But for those that are a bit more sensitive, this is how they might feel. They might even express a thing or two by saying something like, “Geez, I haven’t won a game in weeks!”

Don’t be a gloater!

Instead of gloating about your win, be a humble winner. Allow others to congratulate you first and reply with a gracious “thank you.” Incorporating this behavior as well as the others stated in my Golden Rules will get you one step closer to becoming the kind of player everyone enjoys having around the table. Again, it would be a lot easier if there were behavioral rules for mah jongg or books on how to play mah jongg with etiquette but since there are none.

Want to learn or improve your skills?

If you are a new mah jongg player or interested in learning or you want to improve your skills, please check out my book and my new online school.

Golden Rule #17 coming soon. Don’t forget to read the previous blogs as well! And of course, don’t forget to keep my Golden Rules handy. If you think someone needs a little help with their habits or behaviors, you can pull out your sheet and say, “Hey guys, look what the teacher says!”

Debbie’s Golden Rules #s 4, 5, 6 & 7 – Don’t dive across the table and grab the joker when doing a joker exchange. You’re not diving for a buried treasure and more!

Out of my Love of Mah Jongg

Debbie’s Golden Rule #11 – Snap, crackle, and pop are sounds that are better suited to a bowl of Rice Crispies cereal. Leave the gum home, please.