Debbie’s Golden Rule #19 – During Mah Jongg, do you use a loud tone while speaking? Do you whistle, hum, or sing along to the music? If these are annoyances to others, consider toning it down or hold back your beautiful sounds to keep the peace. Or, if you are the one being annoyed, consider taking a closer look at why certain things bother you. 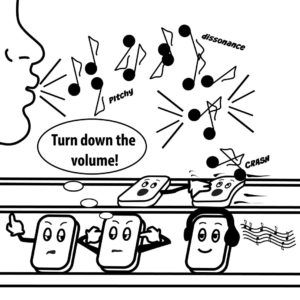 Practicing etiquette and playing Mah Jongg with good habits and behaviors including being courteous has been my focus in previous blogs. This blog and Golden Rule #19 was inspired by personal experiences and by readers like you.  Although the main focus will be about habits and behaviors, whether those habits are considered bad habits or the behavior considered discourteous is up to you to decide after you read on.

We’ve probably all been around people whose voices are at max volume. And, while is it easy to click on your phone, or tap on your car radio to turn down the volume, it’s not so easy when it’s our friend or relative. Or, what about our Mah Jongg buddy that we share a Mah Jongg game with once or twice a week?

If you have someone with a loud voice around your Mah Jongg table, saying something can be a sensitive topic. What if her loud speaking voice has become a lifelong personality trait. A personality trait that they acquired in order to be heard in situations where they might not have been otherwise. Maybe you ask, “Can you please lower your voice?” Or, use a hand motion to indicate that they bring it down a notch? But both propositions can be awkward and uncomfortable.

After reading the article, I believe that most loud talkers fall into the personality component. I also think loud talkers are aware of their loud voices because a close friend or relative might have told them. I’ve had a friend say to me “Wow, you are really hyped up today; your voice is so loud.” I’ve apologized and then made a conscious effort to tone it down.

If after reading Dr. Shah’s article you can pinpoint the reason your voice might be running on high octane, ask yourself, “Can I become conscious enough to change this behavior?” Changing this behavior will alleviate a potentially uncomfortable situation for your Mah Jongg buddies.

Although Dr. Shah’s excellent article does include the biological component to why one might speak louder or softer than the norm, I do want to mention those that wear hearing aids. Background noise can cause havoc to those devices. If someone’s hearing loss is congenital or brought on by disease or aging, we should understand that speaking louder than usual might be out of their control or on purpose.  When it comes to playing Mah Jongg, following Golden Rule #12 will undoubtedly help the hearing impaired player because background noise is challenging.  With a higher than average amount of background noise, a hearing-impaired player might raise the volume of their voice to compensate. And, in most, cases they do so to be considerate and to be sure other players can hear the name of their discarded tile or when they call a tile.

What about other sound disturbances such as your Mah Jongg buddy who whistles, hums or sings along to the music? I never paid much attention to or cared whether another player whistled, hummed or sang along to the music. To me, it indicates that the person is happy and enjoying themselves. But to some, listening to whistlers, hummers or singers is downright irritating.

I removed myself from a game as I was told to stop singing in my own house. Yep, you heard it right, in my own home! I no longer play with that person because her complaints went way beyond that one. I play Mah Jongg to have fun—aren’t games supposed to be fun?

Whistling, according to some, might be at the top of the list of most irritating sounds. But if Walt Disney’s Snow White could do it while she sang “Whistle while you work,” you’d think whistling in most situations might not be all that bad. But singing to animals is a whole lot different than singing to our fellow humans.

You can find another interesting take on one’s sensitivity to certain sounds in John Osborne’s blog. I gained a broader perspective about the whistler and the one listening to the whistler through John’s journey. After reading his blog, you might too! Maybe, just maybe, it is not the whistler, the hummer, or the singer that needs change. Instead, perhaps it is the one who is annoyed. If they can gain a better understanding of themselves, maybe they can learn to accept other’s joy when they whistle, hum or sing.

But in the end, should you make little changes to keep your Mah Jongg buddies happy? I genuinely don’t believe that loud speaking, whistling, humming, or singing are inconsiderate habits or behaviors. Can you make minor changes to keep peace around the Mah Jongg table? It might also depend on whether you are the one who is annoyed or the one doing the annoyance. At some point, we can decide if what we do or how we feel makes us uncomfortable enough to change our situation.

Of course, as with most things in life, the more know and the more informed you are can guide you to making better choices!

As always, I love receiving your comments. Let me know about your experiences while practicing etiquette and playing Mah Jongg with good habits and behaviors. Don’t forget to check out my book and my new live, interactive online School of American Mah Jongg.

Golden Rule #20 is just around the corner.

Debbie’s Golden Rule #16 – Be a humble winner; no one likes a gloater; you have not just won the lottery.